Given the fact that more than 90% of the ocean is undiscovered. There is a big possibility of giant sea monsters living in the deep sea. Most deep-sea creatures are very odd-looking as compared to the upper sea creatures. At first glance, these sea creatures look unbelievable. These deep-sea creatures can be found as deep as 5000 m where pressure is so much that it can crush you in seconds. Let us take a look at some of the scariest deep sea creatures found. 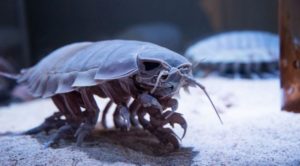 A giant isopod is any of the almost 20 species of large isopods in the cold, deep waters of the Atlantic, Pacific, and Indian Oceans. The creepy creatures are bottom-dwelling, carnivorous crustaceans and can grow up to 2.5 feet in length. They’re also somewhat remarkable, in that they can go for months or even years without eating. One giant isopod in Japan went for five years without eating anything before it finally succumbed to starvation and died. 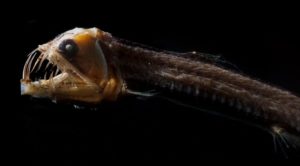 Known scientifically as Chauliodus Sloan, it is one of the fiercest predators of the deep. This fish can be easily recognized by its large mouth and sharp fang-like teeth, so long that they cannot fit inside the mouth. They curve backward alongside the fish’s head. It can grow up to 12 inches in length. Have a very low metabolic rate, allowing them to go days without eating. 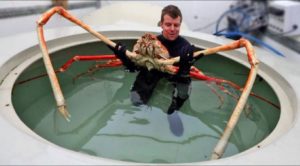 The Japanese spider crab is a species of marine crab that lives in the waters around Japan. It has the largest leg span of any arthropod. But they can’t swim and spend most of their time walking around. Fully grown it can reach a leg span of 12 feet (3.7 m), a body size (carapace width) of 15 inches (38 cm) and weigh as much as 44 pounds (20 kg). 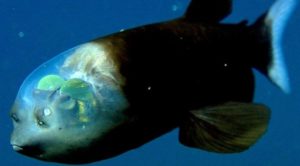 the Macropinna microstoma, known as the barreleye fish, is small and dark with large fins, a tiny mouth, and unusual ‘barrel’ eyes under a transparent dome. The two green spheres in the video are the lenses of its tubular eyes. To better serve their vision, barreleyes have large, dome-shaped, transparent heads; this presumably allows the eyes to collect even more incident light and likely protects the sensitive eyes from its enemies. 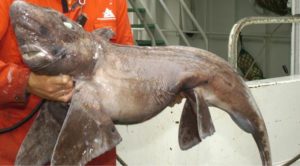 Chimeras are fish that are distantly related to sharks. They can be found in cold to temperate waters all across the world. One of their defining features is the fact that their skeleton is made out of cartilage instead of bone. Given that they mostly inhabit the deep, scientists have found it difficult to isolate their diet, but it is known that they’re carnivorous and mostly snack on worms, crabs, sea stars and clams. 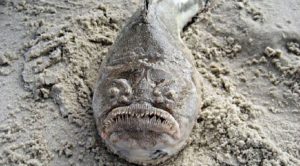 The Stargazer fish has eyes that are situated on top of its head, and the mouth is bigger than normal, facing upwards. Hence, the name stargazer. The stargazer’s usual method of attack is by camouflaging itself in the ocean sand, before using its gigantic mouth to suck in unsuspecting prey. To finish off the job, this tricky fish has two venomous spines. 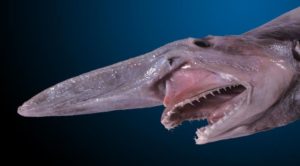 The goblin shark is a rare species of deep-sea shark. Sometimes called a “living fossil”. It lives in very deep water, far from humans, and it is thought to be a poor swimmer and have bad eyesight. But the most terrifying thing about this deep-sea dweller is its highly extendable jaws. They are able to instantly snap forward to capture prey. Scientists would love to study a living specimen of the rare Goblin Shark. One creature was caught in Japan in 2007, and scientists were ridiculously excited. Unfortunately, it died a few days later. 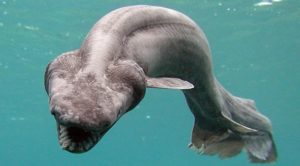 The frilled shark is one of two extant species of shark in the family Chlamydoselachidae, with a wide but patchy distribution in the Atlantic and Pacific Oceans. This freaky shark is often referred to as a “living fossil” because they haven’t changed much in the 80 million years they have lived on Earth. Seldom observed by humans, the species lurks deep in the Atlantic and Pacific oceans at depths between 120 and 1580 meters. 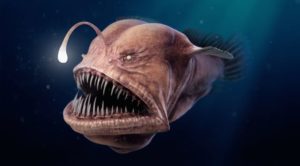 Anglerfish likes to live in the deep sea and looks pretty horrible with its big head and sharp teeth. That footage, of a whipnose anglerfish (Gigantactis sp.), was recorded at an ocean depth of 5,000 meters. Just like in Finding Nemo, the deep sea varieties of anglerfish have nightmarish mouths filled with long, fanged teeth. Their characteristic mode of predation is by using a fleshy growth from their head as a fishing lure, waving it back and forth to attract prey. Also, another weird thing about this species is that once the male finds a suitable mate, he bites into her belly and latches on until his body fuses with hers. Their skin joins together, and so do their blood vessels, which allows the male to take all the nutrients he needs from his host/mate’s blood. The two fish essentially become one. 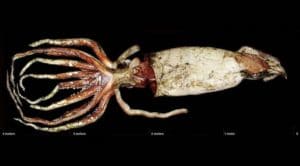 The giant squid lives up to their name: the largest giant squid ever recorded by scientists was almost 43 feet (13 meters) long, and can be weighed up to a ton. Given the sheer size of this weird creature, you’d think that we’d come across them all the time, but in reality, the giant squid is a highly mysterious animal. Most specimens that scientists are able to study wash up at sea and are found by fishermen. Despite their size, the animals are effective and agile hunters and are able to catch prey from a whole 10 meters away by shooting out their two ‘feeding tentacles,’ which are lined with hundreds of suckers. So which sea creature do you find the scariest? Tell us in the comment section below.