10 Biggest Man-made Structures in the World 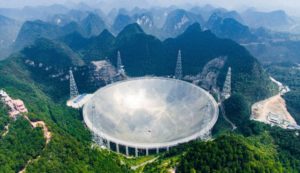 The Five-hundred-meter Aperture Spherical radio Telescope (FAST; Chinese, nicknamed Tianyan ( Eye of the Heaven) is a radio telescope located in the Dawodang depression, a natural basin in Pingtang County, Guizhou, southwest China. It consists of a fixed 500 m (1,600 ft) diameter dish constructed in a natural depression in the landscape. It is the world’s largest filled-aperture radio telescope. 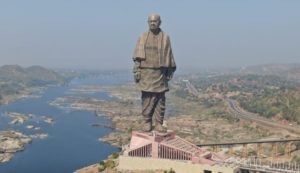 The Statue of Unity is the world’s tallest statue at 182 meters (597 ft). The Statue of Unity is a colossal statue of Indian politician and independence activist Sardar Vallabhbhai Patel, who was the first Deputy Prime Minister and Home Minister of independent India and the chief adherent of Mahatma Gandhi during the non-violent Indian Independence movement. It rises 54 meters (177 ft) higher than the previous record-holder, the Spring Temple Buddha in China’s Henan province. 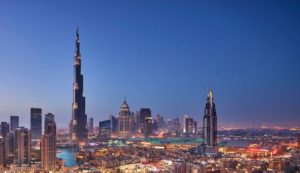 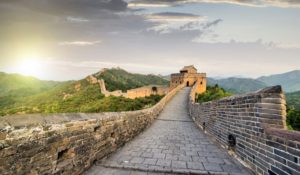 The Great Wall of China is the collective name of a series of fortification systems generally built across the historical northern borders of China to protect and consolidate territories of Chinese states and empires against various nomadic groups of the steppe and their polities. It is about 21,196 kilometers (13,171 miles) long, 9.1 meters (30 feet) wide and 15 meters (50 feet) high. The earlier sections on the wall are made of compacted dirt and stone. Later in the Ming Dynasty, they used bricks. 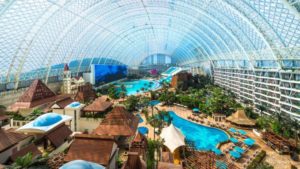 Located in Chengdu China, this structure is hailed the biggest at 1,760,000 square meters. It’s triple the size of the Pentagon. Its slogan is “The One of Everything.” It has a shopping mall, theater, water park, church, hotel, ice skating rink, office space, an indoor swimming pool (also called artificial beach sans the sand) and so on. 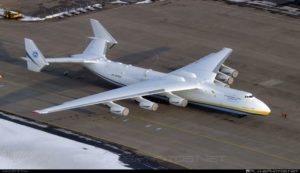 Generally acknowledged as the largest airplane in the world, the single Antonov An-225 is the world’s heaviest aircraft ever (maximum takeoff weight greater than 640 tons) and the largest heavier-than-air aircraft (in length) ever entering operational service. Originally built as a transport for the Soviet Union’s Buran space shuttle, the An-225 was forced to find new purpose as a cargo carrier after the USSR collapsed 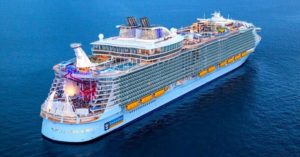 The 25th ship in Royal Caribbean’s fleet, Symphony of the Seas is currently the world’s largest cruise ship. The enormous cruise ship has 228,081 total registered tons, measures 238 feet tall and spans 1,188 feet long. Symphony of the seas is termed as the ultimate family’s vacation destination with a striking lineup of energy-filled, heart-pumping adventures. The biggest cruise ship in the world offers the chance to go head-to-head in a glow-in-the-dark laser tag adventure, take the plunge down the Ultimate Abyss – the tallest slide at sea towering 10 stories high – or soak up some sun after getting wetted on epic waterslides and FlowRider surf simulators. 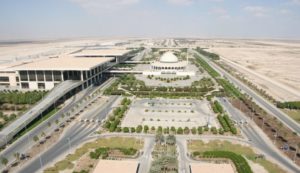 King Fahd International Airport (KFIA) in Dammam, Saudi Arabia is the largest airport in the world covering an area of 78,000 hectares. The airport has a massive 6 story passenger terminal out of which three are for passenger processing, one for arrivals, one for departure, and one for boarding. The passenger terminal covers an area of 3,520,000 square feet and it is equipped with many customer counters, including 66 reserved for Saudi airlines and 44 for foreign airlines. King Fahd international airport is larger than Mumbai. This airport has an area of 780 sq. Km and holds a Guinness world record of being the largest in the world. It is even larger than Bahrain! 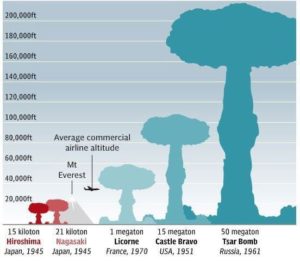 The RDS-220 hydrogen bomb, also known as the Tsar Bomba, is the biggest and most powerful thermonuclear bomb ever made. It was detonated by the Soviet Union on 30 October 1961 over Novaya Zemlya Island in the Russian Arctic Sea. The world’s biggest nuclear device ever to be set off – would kill an estimated 5.8 million people if it were dropped on London. 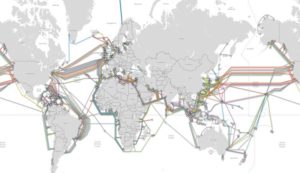 A submarine communications cable is a cable laid on the sea bed between land-based stations to carry telecommunication signals across stretches of ocean and sea. Submarine cables are laid down by using specially-modified ships that carry the submarine cable on board and slowly lay it out on the seabed as per the plans gave by the cable operator. The ships can carry with them up to 2,000km-length of cable. Today, there are over 420 submarine cables in service, stretching over 700,000 miles (1.1 million km) around the world.