Zombie apocalypse and zombie-proof vehicles – These two are on top of the wish list of almost every gamer. While the world is fighting against COVID-19 or Coronavirus still many are busy making memes and joking about it. But a zombie apocalypse will be nothing like COVID-19 and staying indoors is not gonna keep you safe for long. So we have made a top 10 list of the most badass vehicles that you can run upon zombies without getting in trouble. 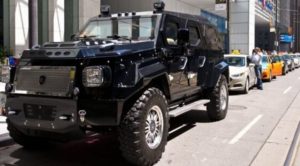 Who says you can’t stay drenched in luxury in this new post-apocalyptic world? The Knight XV is luxury and ruggedness, fused into one completely bad-ass SUV. The vehicle is packed with a 6.8 liter V10 engine, seating for 6, night vision cameras and bulletproof armor 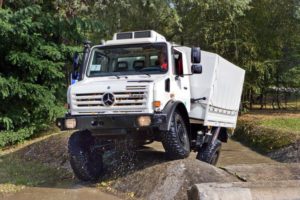 As Mercedes-Benz says, the Unimog offers “absolute off-road supremacy.” Since it’s designed to perform in disaster emergencies and the harshest conditions, we’d have to imagine the Unimog is as dependable as it is fun to say. Unimog stands for “UNIversal MOtor Gerät” wich means universal motor device. The Unimog was and still is, used for multiple jobs like farming, construction work, military activities and much more. 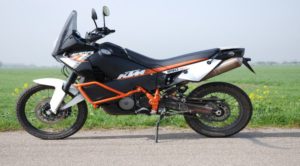 The KTM 990 Adventure is a dual-sport motorcycle produced in Austria by KTM. The bike is powered by the LC8 liquid cooled, four-stroke, DOHC 999 cc 75° V-twin engine, producing around 78 kW. It is capable of a top speed of around 123 mph. The engine was evolved from the 950 Adventure. 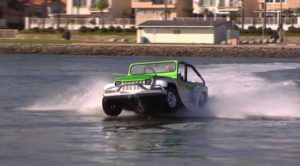 It’s a WaterCar Panther, an amphibious vehicle that looks like an elongated Jeep Wrangler. It can travel by land or by sea. Though it wears a Jeep Wrangler-inspired face, the Panther is a vehicle built entirely from scratch. 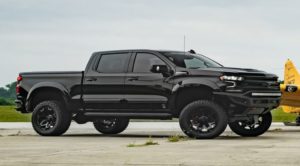 Luck favors the prepared and the Silverado Black Ops concept is a survival kit on four wheels. The sinister-looking concept is based on the Silverado Crew Cab 4×4, building on its strength, performance and safety with features designed to turn the wasteland into an oasis, including custom-fabricated lower body armor and a lockable, bed-mounted Truck Vault storage unit. It holds a solar power pack, a pair of gas masks, gloves, military First Aid Kit, folding shovel and rope. 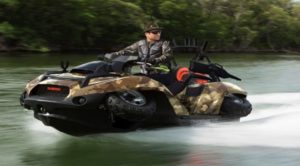 The Quadski is the world’s first sports amphibian. At the press of a button the Quadski’s wheels deploy when approaching land and retract after entering the water. In a world full of zombies who can’t swim, this vehicle will perfectly fit into your escape plan. 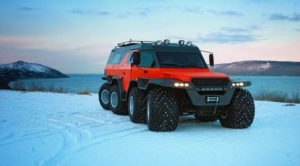 When Mercedes unveiled the Mercedes-AMG G63 6×6, it was thought to be the ultimate off-road vehicle designed to crush zombies and scale Mt. Everest. That was, until, a video caught the luxury off-road Mercedes getting snuck in the snow, needing a snowcat to assist pulling it out. Granted, it appears the snowcat did little to help. However, if that turns you off to the G63, there is the Avtoros Shaman 8×8. It has two more axles than the G63 6×6, and it towers over the Mercedes in both size and ridiculousness. 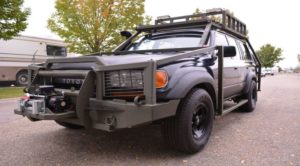 The ultimate champion of offroading- The Landcruiser is often considered as the king of SUV’s. The vehicle that can take you anywhere. The good thing about the Toyota Landcruiser is that they built them for years with very minor changes. Today’s survivalist hails from 1994 and, in its modified state, offers the perfect base station for your zombie jihad. With a bullet-proof diesel six, solar panels and a camper top, it will make all the treks between your shopping mall compound and the gun store over on main street all that much more enjoyable. 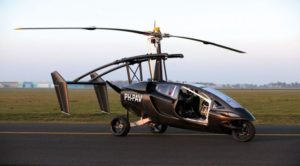 One thing that zombies for sure will not able to do is to fly. The PAL-V is one of the first flying cars in the world available for purchase at a list price of $400000. The PAL-V One is a combination car and helicopter that’s built by the PAL-V company. The PAL-V One seats two and can be driven on the road and into the air — you don’t even need a pilot’s license. 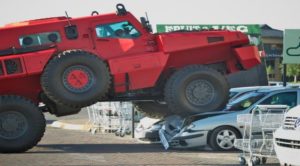 Behold the ultimate Zombie apocalypse survival vehicle – Marauder. If you love monstrous-looking cars you are sure in for a treat. The Marauder is an armored, mine-protected vehicle that is produced by Paramount Group in South Africa. It can be mounted with a gun on its top. But with such a heavy body and powerful engine who’s gonna need a gun. This vehicle can penetrate through walls easily and would be a fun drive in a city full of zombies. Did we miss anything or a vehicle that you think should be on this list? Tell us in the comment section below.