10 Reasons the Moon Landings Could Be Fake

The moon landing is still considered as one of the greatest achievements humans have achieved. As Neil Armstrong set his foot on the moon the United States made history to be the first-ever country to reach the moon. However, after the original videos and photographs were published they created a lot of buzzes. As the photographs made people believe that the government and NASA have lied and the moon landing is just a hoax. Today we made a list of 10 such theories by conspiracy theorists that say why the moon landing was fake.

During the cold war, the US government wanted to win in every field. The Soviet Union’s space program was performing very well and they were very close to launch a successful moon mission. But Americans can’t let that happen so they faked a moon landing. 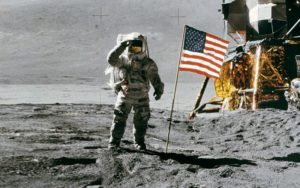 This picture of Buzz Aldrin standing next to the American flag became popular for a very obvious reason. Conspiracy theorists pointed out that the flag on the moon was waiving since there was no atmosphere on the moon flag couldn’t wave. NASA claimed that the flag was stored in a thin tube and the rippled effect was caused by it being unfurled before being planted. They also explained that the flag was made in such a way so it would look like waves. 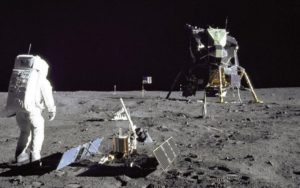 If you also have seen the pictures then you may have noticed that there are no stars present in any of the photographs. The argument here is that NASA would have found it impossible to map out the exact locations of all-stars for the hoax without being rumbled, and therefore left them out – intentionally falling back on an excuse that the quality of the photographs washes them out. When asked about it NASA gave the same reason that theorists claimed about earlier. Theorists have also said that there are pictures taken from the earth in much lower quality but you can still see the stars in them. 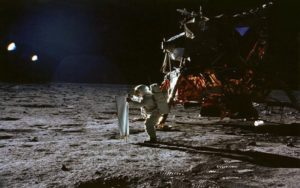 When the Lunar module landed on the moon there would be a blast crater underneath the lunar module to mark its landing. But there wasn’t an impact crater under the lunar module and it looked like it was simply put in there. The surface of the moon is covered in fine dust and even this doesn’t seem to have been displaced in photographs. NASA maintains that the module required significantly less thrust in the low-gravity conditions than it would have done on Earth. The surface of the moon itself is solid rock, so a blast crater probably wouldn’t be feasible anyway. 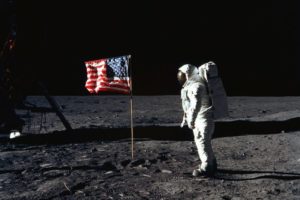 The conspiracy theorists also claimed that the US couldn’t afford to send astronauts into space, so they fabricated it, creating the effect of the weak gravity on the moon by attaching thin wires to the astronauts and filming them jumping. They say Nasa then slowed down the film to make it look as if they were floating. In some photographs, outlines of alleged hidden cables can be seen. 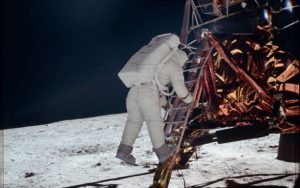 From photographs, theorists tried to prove that there were other sources of light as the shadows fall into different directions and were of varying lengths. NASA explained the science behind it is that the astronauts were taking their photos in a hilly, brightly-lit landscape, while the sun was close to the horizon, so of course the contours of the ground would produce shadows of varying lengths.

Moon landing hoax conspiracy theorists claim to have found an identical backdrop in two different pictures from the Apollo 15 fourth lunar landing mission in 1971. The pictures are said by NASA to have been taken some miles apart on the Moon during the mission. 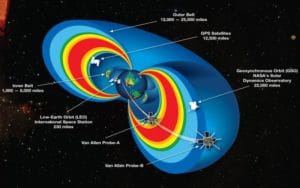 A Van Allen radiation belt is a zone of energetic charged particles, most of which originate from the solar wind, that are captured by and held around a planet by that planet’s magnetic field. Therefore To reach the moon, astronauts had to pass through it. Apollo’s mission was the time in history to transport living humans through the belt. Conspiracy theorists contend that the sheer levels of radiation would have cooked the astronauts en route to the moon, despite the layers of aluminum coating the interior and exterior of the spaceship. But NASA countered this argument by the short time it took the astronauts to traverse the belt so they received very small doses of radiation. 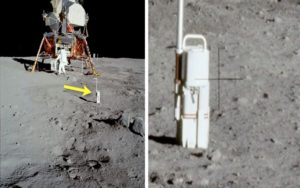 NASA used multiple crosshairs with the cameras to aid with scaling and direction. These crosshairs can be seen imprinted over the top of all photographs. Some of the images, however, clearly show the cross-hairs behind objects in the scene, implying that photographs may have been edited or doctored after being taken. 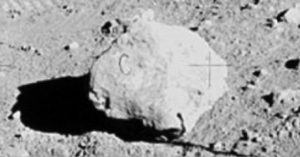 One of the most famous photos from the moon landings shows a rock in the foreground, With the ‘C’ letter engraved on it. Notice in the photo to the right that the large rock in the foreground has what appears to be a capital letter “C” on it. This is considered by some to be a stage marking used in staging a photoshoot. NASA also has explained that this must be a practical joke by the photographic developer or that it could be a hair or a fiber on the original negative and therefore was removed.