10 Ancient Sites Some People Think Were Built By Aliens

Aliens existence is still one of the hot debate that has been running on around for ages. Whereas many people claim about the aliens visiting the earth. There are hundreds of UFO photographs, you can find on the internet. But if aliens did visit the earth, did they advised ancient people to construct their temples, pyramids and fortresses that we see now. Below we have 10 such ancient constructions that people believe were built by aliens. 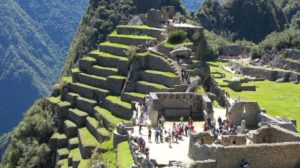 Machu Picchu is an Incan citadel set high in the Andes Mountains in Peru, above the Urubamba River valley. Machu Picchu raises some questions about the ability of ancient humans to build such a large scale structure at that time. History channel has questioned the positioning of Machu Pichu stones. Where some stones are as big as modern-day buses. While stones on top of the structures are also a little hard to be explained how ancient people got them there. According to Some historians and other people, this might be the work of aliens. 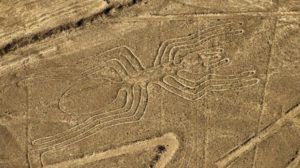 Nazca Lines in southern Peru are a group of pre-Columbian geoglyphs etched into desert sands. Covering an area of nearly 1,000 sq. kilometres, there are about 300 different figures, including animals and plants. The longest of the lines run straight as an arrow for miles. The biggest shapes stretch nearly 1,200 feet across and are best viewed from the air. The size and the time these lines were drawn makes some people believe that they were built by aliens. 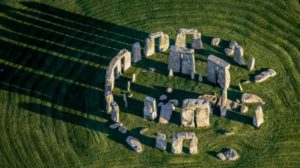 Stonehenge is a prehistoric monument in Wiltshire, England. It consists of a huge circle of stones, where some stones weigh as much as 50 tons. The Gigantic structure was built around 5000 years ago. Some historians and authors stated that it was a model of the solar system and also functioned as an alien landing pad, or what could be the explanation of these massive stones ending up hundreds of miles away from their home Quarry. But archaeologists and scientists have falsified these statements and demonstrated how it is possible to build such a structure using technologies available around 5000 years ago. 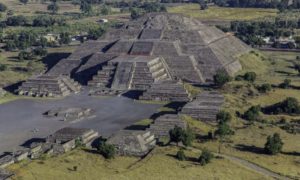 Teotihuacan is a vast Mexican archaeological complex northeast of Mexico City. These massive structures were built more than 2000 years ago. This city at that time could hold 100000 people. Teotihuacan’s size and its complex structure make people believe that no humans at that time would have been able to build this. 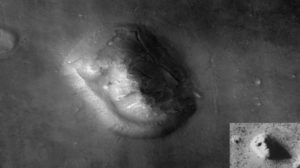 This one can amaze you in many different ways and can make you believe that aliens build it. This is the only listing that is not on earth. Face on Mars Spotted by the Viking 1 orbiter in 1976, the so-called face is nearly two miles long and is in a region called Cydonia, which separates the smooth plains of the Martian north from the more cratered terrain in the south. In 2001, NASA’s Mars Global Surveyor took another good look at the face—using a much higher resolution camera—and saw no face. Later revealed by NASA that what looked like a face in real was an old martian mesa. 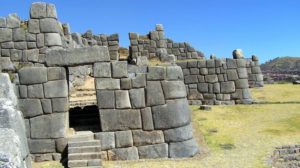 Sacsayhuamán is located 2 kilometres north of the Main Square of the Cusco. Built from enormous stones that have been chiselled and stacked together like a jigsaw puzzle. The 1,000-year-old interlocking fortress walls are made of rocks that weigh as much as 360 tons each, and which were carried more than 20 miles before being lifted and fitted into one place with laser-like precision. People claim that this built was done by the aliens, or how could people 1000 years ago lifted the stones and made that structure. 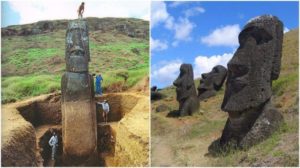 Easter Island, a Chilean territory, is a remote volcanic island in Polynesia. It is most famous for the nearly 1,000 extant monumental statues, called moai. The figures averages at 13 feet tall and weigh 14 tons and appear to have been chiselled from the soft volcanic tuff found in the Rano Raraku quarry. It’s still a mystery that why these stones were carved into giant faces. Some theories suggest that they were likely to be sculpted for religious or ritual reasons. While some people claim that aliens helped ancient people building these statues, because by no technology at that time, that would make it possible to lift a 250 ton stone. 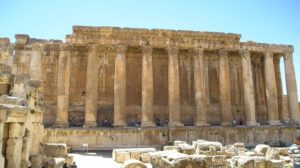 Baalbek, Lebanon, is the site of one of the most mysterious ruins of the Roman Empire, a monumental two-thousand-year-old temple to Jupiter that sits atop three thousand-ton stone blocks. According to alien theorist Georgio Tsoukalos, various advanced technologies were used to move these stones, such as anti-gravity technology, and even acoustic levitation. 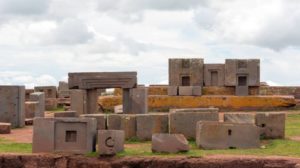 Pumapunku or Puma Punku is part of a large temple complex that is part of the Tiwanaku Site near Tiwanaku, Bolivia. The structure has giant stones that are cut very precisely. Alien theorists claim that how it could be possible for ancient people to cut stones with laser-like precision. 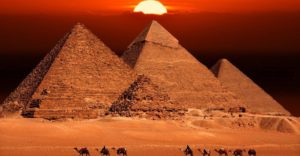 Now, this one is a well-known structure and you may be wondering why these pyramids are on our list. Built more than 4,500 years ago, the Pyramids of Giza are monumental tombs where ancient queens and pharaohs were buried. The Great Pyramid is made of millions of precisely hewn stones weighing at least two tons each. Even with today’s cranes and other construction equipment, building a pyramid as big as that of Pharaoh Khufu would be a difficult challenge. The pyramids line up exactly with the Orion constellation, involving a level of precision unusual for people of that time. This level of precision indicates that ancient Egyptians had advanced technology. Or did aliens helped them building the Pyramids? So which one of them do you think were built by aliens. Tell us your answer in the comment section below.