10 Times The Simpsons Predicted the Future 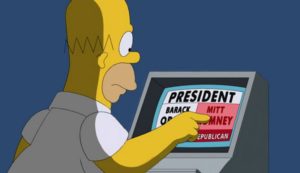 In 2008 The Simpsons did an episode in which Homer’s vote for Barack Obama was magically switched to John McCain every time he tried to press the president’s name on an electronic voting machine. Four years later, a voting machine in Pennsylvania had to be removed after it kept changing people’s votes for Barack Obama to ones for Republican rival Mitt Romney. 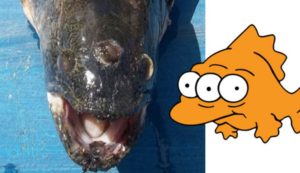 In this episode from 1990, Bart catches a three-eyed fish named Blinky in the river by the power plant, which makes local headlines. As it turns out, the Simpsons were right yet again, as fishermen in Córdoba, Argentina caught a three-eyed wolf fish in a reservoir fed by a local nuclear power plant. 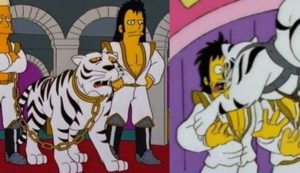 After Springfield decides to legalize gambling, Mr. Burns opens a casino where German magicians Gunter and Ernst perform a routine, seeming to spoof the long-running Las Vegas Siegfried and Roy show. Tragically, a bit in which the animated duo is attacked by their tiger came to fruition 10 years later when Roy Horn was mauled on stage by a white Bengal tiger, leaving him partially paralyzed and ending the long-running production. 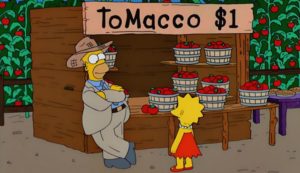 In the episode, “E-I-E-I-D’oh!” Homer, along with the rest of the family flee to the country where they become farmers. Homer uses plutonium to make his crops grow bigger and faster. This mutated his crops and he grows a cross between tomatoes and tobacco, which he called “ToMacco.” This episode aired in 1999. In 2013 there were mutated vegetables found in Japan near a nuclear power plant. Some of the crops were tomatoes that had growth on them, while other crops were abnormally large. 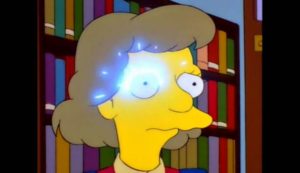 Another highlight from ‘Lisa’s Wedding’, here, as Lisa’s college librarian turns out to be an android (and one who violently bursts into flames, too). There haven’t been any blown circuit board disasters in Chicago yet but, in 2011, it was announced that the city’s new Joe and Rika Mansueto Library would have robotic librarians who’d helpfully retrieve books for you. 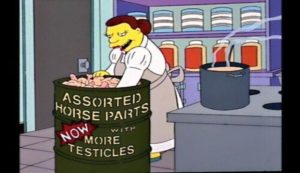 In “Sweet Seymour Skinner’s Baadasssss Song” we catch a cook including horse meat as a secret ingredient in her food. What should have remained a dark joke in the 1994 episode, sadly became a reality. Four beef products from a company called Bird’s Eye tested positive for horse DNA in 2013, according to BBC. This company sold meat to companies like Taco Bell. 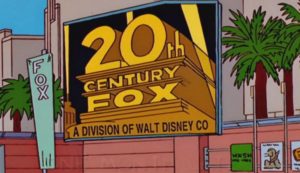 On December 14, 2017 Disney announced that it would buy a huge stake in Fox for a reported $52.4 billion. Pretty amazing price tag, right? What’s even more amazing is that The Simpsons predicted it in 1998 in an episode entitled “When You Dish Upon A Star. 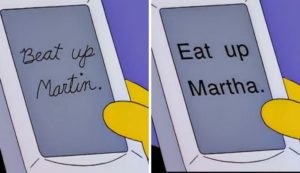 Characters on The Simpsons were annoyed by autocorrect long before anyone else. In “Lisa On Ice” Dolph uses a Apple Newton, a personal digital assistant, to write down “Beat up Martin” only for it to be changed to “Eat up Martha.” This joke in the 1994 episode actually somewhat inspired the real autocorrect that was later available on Apple devices. 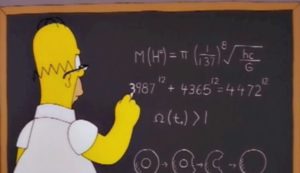 The Higgs boson, often referred to as the God Particle. was discovered by scientists in 2012. However, inexplicably, in a 1998 episode of The Simpsons titled “The Wizard of Evergreen Terrace” Homer writes an equation on the chalkboard that, according to Dr. Simon Singh, reveals the mass of the Higgs boson. In The Independent he says, “It’s kind of amazing as Homer makes this prediction 14 years before it was discovered.” 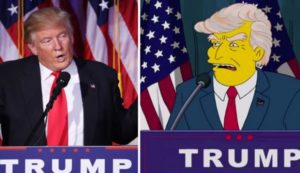 When Bart flashes forward into adulthood, viewers learn that Lisa not only becomes president, but inherits “quite a budget crunch” from her predecessor, Donald Trump. “The country is broke?,” she asks her aides in one scene. “How can that be?” At the time, the real Trump presidency was still 16 years away. However, in a 2016 interview with The Hollywood Reporter, writer Dan Greaney explained the joke was meant as a warning to the country. “That just seemed like the logical last stop before hitting bottom,” he said. “It was pitched because it was consistent with the vision of America going insane.