10 Most Luxurious Homes In The World

When it comes to living lavishly no one except some billionaires know how to spend their money. They spend billions of dollars just on their homes, just to showcase how wealthy they are. Owning a luxurious home has become a competition in today’s business world. While most of these houses hold features we’ve probably never heard of, So here are 10 of the most luxurious homes around the world, where most of us will love to spend just one night in one of these. 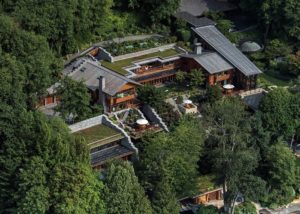 Being the richest person in the world for the longest interval of time, it’s no surprise that Bill gates home comes in the list of most luxurious houses in the world. Bill Gates mansion overlooks Lake Washington in Medina, Washington. The 66,000 square-foot mansion is noted for its design and the technology it incorporates. Gates’ cutting-edge smart mansion boasts a 60-foot pool with an underwater sound system, six kitchens, an elegant Art Deco theatre and a cavernous reception hall that can seat up to 200 people. 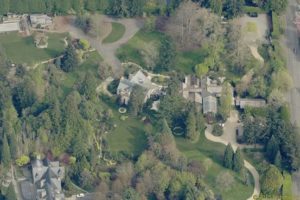 The current richest person in the world ‘Jeff Bezos’ has a net worth of over $100 billion. But unlike other super-rich people, he does not like to spend a lot of money on his houses and for his luxury needs. Jeff Bezos maintains his home in the ultra-rich community of Medina, which he’s had since the late 1990s. The Washington State Bezos property is a 29,000-square-foot estate, complete with both a main house and a boathouse, along 200 yards of shoreline. 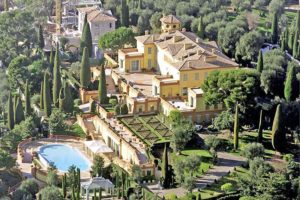 Lily Safra is a Brazilian billionaire philanthropist and socialite who attained considerable wealth through her four marriages. By March 2013, her net worth was estimated at $1.2 billion according to Forbes. Spread across 20 acres, Villa Leopolda has a reputable history of owners including Gianni and Marella Agnelli, Izaak, Dorothy J. Killam. Since 1987 it was owned by a Swiss banker Edmond Safra, who passed it on to his survivor and mistress Lily Safra. The architectural character of this villa belongs to a historical style called Belle Époque which translates to ‘Beautiful Era’. Designed by an American architect named Jr. Ogden Codman, on an estate once owned by King Leopold II of Belgium. 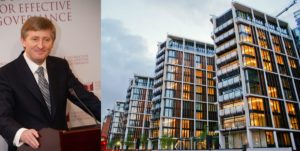 Rinat Akhmetov is ranked among the wealthiest men in Ukraine. As of 2019, he was listed as the 272nd richest man in the world with an estimated net worth of US 6.4 billion. He spent a record-setting amount of £136.4m, to buy two of the world’s most expensive apartments, in Knightsbridge, London. This project by Richar Rogers, and his firm Rogers Stirk Harbour + Partners encompasses an area of 25,000-square feet. Each of these apartments flaunts a 360º protection by bulletproof glass facades, exclusive interiors designed by Candy & Candy and sophisticated lighting systems by artist James Turrell, which gradually change the ambiance from sunset to sunrise. 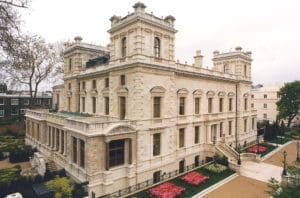 London’s Kensington Palace Gardens is the most expensive address in Britain. Kensington Palace Gardens is also the second most expensive street in the world. Reportedly the average price per square meter here is $107,000. Lakshmi Mittal owns not one, but three palatial homes on this street numbered 9a and 18-19. The house was designed by Sir Charles Barry in 1845, as a pair of semi-detached ‘Palazzo’ style villas. Lakshmi spent millions to renovate and transform the renaissance styled mansion into “Taj Mittal”. With a total of 12 bedrooms, a pool, and Makrana marble, this mansion can be considered a pricey tribute to his Indian origins. 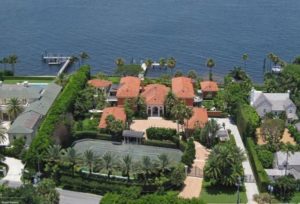 Kenneth Griffin is the founder and chief executive of the global investment firm Citadel and has an net worth of over US$11.7 billion. The hedge fund titan purchased four side-by-side properties totaling eight acres on the ocean. Three lots tout houses while the fourth was already torn down; the entire swath of property was once used as a single estate. The house has six kitchens, a library and a full-fledged guest house. 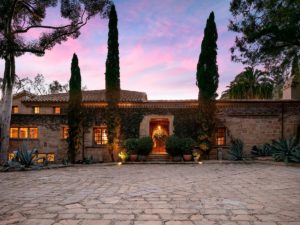 Ellen Lee DeGeneres is an American comedian, television host, actress, writer, and producer. She starred in the popular sitcom Ellen from 1994 to 1998 and has hosted her syndicated TV talk show, The Ellen DeGeneres Show, since 2003. Ellen’s 10,522 sq ft two-story mansion has six beautiful bedrooms and seven bathrooms. The house is decked out with nine fireplaces, an amazing garden, a pool with an ocean view, and an outdoor dining area. 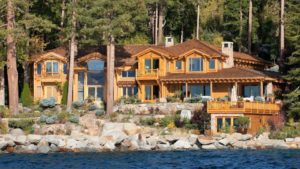 Larry Ellison, co-founder, and chairman of Oracle, world’s fifth-richest man, and a popular property collector, constructed his Japanese-style estate in 2004, which took him 9 years to make. Fashioned after a 1600 CE Japanese emperor’s palace, this mansion was designed and constructed by Paul Driscoll, a Zen Buddhist teacher, and architect. It includes three cottages, a gymnasium, eight bridges, two gardens, a five-acre man-made lake, a bathhouse, and a koi pond. The landscape also includes expenses of cherry blossom, maple and other Japanese species along with pines, oaks, and redwoods. 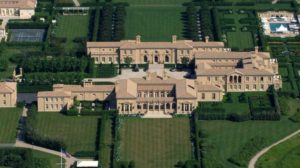 Ira Leon Rennert or simply Ira Rennert is an American investor and business magnate. Rennert was born on May 31, 1934, in Brooklyn New York. Presently he controls the nation’s largest industrial empire and his net worth is USD 6.5 Billion. Ira owns this sprawling mansion, part of a 63-acre estate called Fair Field, one of the largest in the United States. It includes several built forms, has 29 bedrooms, 39-bathrooms, 3 dining rooms, 3 swimming pools, and a 164-seat theatre. The estate also includes a recreation pavilion with basketball court, gym, two bowling alleys, two tennis courts, two squash courts, and many other buildings. A residence of this size also requires an immense supply of electricity, which also is sufficed by an on-site power plant. 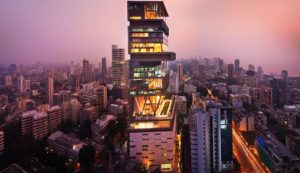 Mukesh Ambani is an Indian business tycoon who chairs and runs $90 billion (revenue) oil and gas giant Reliance Industries, among India’s most valuable companies and has a net worth of US$50 Billion. Like many billionaire families, Ambanis too wanted a luxuriously unique and customized residence. Thus began the conceptualization and construction of ‘Antilia’, designed by the firm Perkins and Will, named after a mythological island in the Atlantic Ocean. Costing over $1 billion and taking four-years to be constructed, Antilia now stands boastingly, amidst the slum-filled context of Mumbai. This 27-floor high residence, stacked to achieve an area of about 400,000 square feet, surpasses the Palace of Versailles in terms of the area comprised. With six levels of parking below the ground level, three helipads, a health spa, a salon, a ballroom, a 50-seat movie theater, multiple swimming pools, yoga, and dance studios and an ice cream room, maintaining Antilia reportedly require a staff of about 600.