With a defense budget of $60 billion, the Indian Military is the 4th most powerful military in the world. India has developed weapons like ‘PINAKA’ that are at par and even superior to that of the US and Russia. India is not only the largest importer of weapons on the planet but it’ll also become the third-highest military spender by 2025. Here is the list of 10 most powerful weapons that India has. 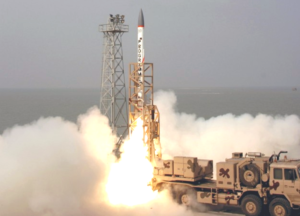 While escalating threats of nuclear attacks from Pakistan, India appears to be very calm and not bothered at all. The reason why India is not worried is because of the PAD(Prithvi air defense system) and AAD(Advance air defense system) are two parts of the BMD (Ballistic missile defense system) of India. PAD is an exo-atmospheric interceptor with a ceiling of over 80 km and a range of over 2000 km. While AAD is an endo-atmospheric interceptor with a range of 250+ km and a ceiling of 30 km. India is one of the few countries in the world to have the missile defense system. If put to use at the same time, PAD and AAD can achieve up to 99.8 percent take-down accuracy. 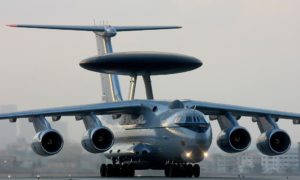 India has one of the most advanced AWACS(Airborne Early Warning and Control System) in the world, used to detect aircraft, ships, and vehicles at long ranges. The Indian Air Force has three AWACS active in service. It consists of an Israeli Elta EL/W-2090 radar mounted on a Russian Il-76 aircraft. This radar is a 360 ° Active electronically Scanning Array (AESA) which is mounted inside a dome on top of the Il-76. Indian AWACS can detect targets from 500 km away in all weather conditions and can guide fighter jets and SAMs to intercept them. 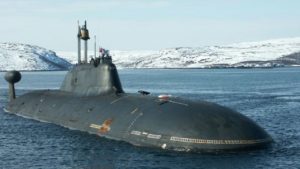 INS Chakra is one of the two nuclear-powered submarines that are active in service. After acquiring the INS Chakra from Russia on the lease of 10 years, India became one of the few countries to operate a nuclear-powered submarine. The INS Chakra is modified for Indian needs and carries a mix of 36 Torpedoes and Klub Anti-ship missiles which can be fired from the 8×533 mm torpedo tubes. The main advantage of this submarine is that it can remain submerged as long as it wants and has an unlimited range, except for the food storage. 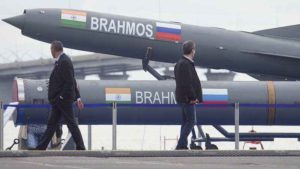 Brahmos is the result of a joint venture between India and Russia to modify the Yakhont missile for Indian requirements and make it into a universal missile which could be launched from any platform. The world’s fastest cruise missile in operation, Brahmos travels at speeds of Mach 2.8 to 3.0. Its air-launched variant has been successfully test-fired and India is now the only country with supersonic cruise missiles in their army, navy, and air force. Compared to other missiles of the same category, BRAHMOS has 3 times more velocity, 3 times more flight range, 4 times more seeker range, and 9 times more kinetic range. Currently, India is upgrading its speed for up to Mach 5. 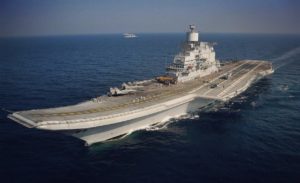 INS Vikramaditya is the only aircraft carrier operated by Indian Navy. This is by far the biggest and most expensive ship in the Indian Navy. It was bought from Russia on 20 January 2004 at price of $2.35 billion, and on 14 June 2014, Prime Minister Narendra Modi formally inducted INS Vikramaditya into the Indian Navy. The carrier has a Russian electronic and sensor suite which is said to be powerful enough to prevent it from being tracked by powerful airborne radar systems. With a displacement of 45,000 tonnes, the warship is capable of carrying over 30 aircraft and helicopters. 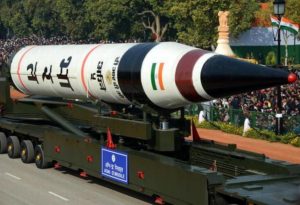 Agni-V is an intercontinental ballistic missile developed by the Defence Research and Development Organisation of India. It is the fifth generation missile of the Agni series and also the most advanced nuclear missile in Indian arsenal. Agni-V has an operational range of 5000 km however it is still unspecified. While China accused India of misleading about the actual range of Agni-V. 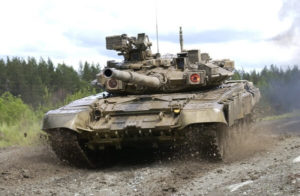 T-90 Bhishma is the Indian name of the Russian T-90 tanks which India purchased from Russia and upgraded it to meet India’s needs. Bhishma weighs just 48 tons and has a crew of 3 which is made possible by the use of an autoloader for the 125 mm smoothbore gun. The unique feature of this tank is its ability to fire the Invar anti-tank missile from its barrel. The 12.7 mm machine gun mounted on the turret can be operated manually and also from the inside by commander. It is stated that the Indian version of T-90 is even better than the Russian variant. 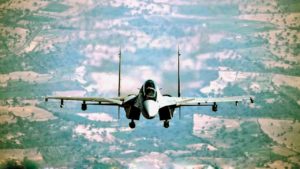 Being the largest operator of SU-30 fighter aircraft, the SU-30MKI is the backbone of the Indian Air force. Originally developed from the Russian SU-30, the Indian version has been upgraded to meet India’s requirements. With its 4000+ km range, 12 Hardpoints for 8000 kg of weapons, PESA Bars radar, it outclasses any other fighter in the region. A single Su-30MkI can do the job of 2 MiG-29 and 2 Jaguar combined. Indian airforce has also successfully test-fired the world’s fastest cruise missile BrahMos from the SU-30MKI making this fighter plane one of the most lethal war machines. 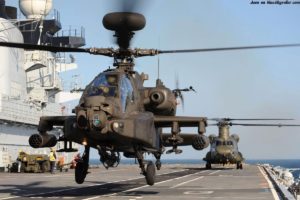 The Apache helicopter is one of the most advanced fighter helicopters in the world and is also known as the “Flying Tank”. Boeing has currently delivered 8 Apache helicopters to the Indian Airforce. The most advanced version of Apache has modern electronic warfare capabilities to provide versatility in network-centric aerial warfare. The Apache has a variety of weapons, including air to ground Hellfire missiles, 70 mm Hydra rockets and air to air Stinger missiles. This is the first time that the IAF has a helicopter in its inventory which can fire air to air missiles. The Apache also carries a 30 mm chain gun with 1200 rounds, has a nose-mounted sensor suite for target acquisition and night vision systems. Its cockpit is bulletproof, making it ideal for use against tanks and armored vehicles. 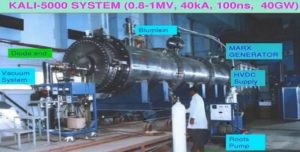 One of the most classified weapons of Indian military The KALI(Kilo Ampere Linear Injector) is a linear electron accelerator developed in India by the “DRDO” or “Defence Research and Development Organisation” and the “BARC” or “Bhabha Atomic Research Centre”. The weapon is designed so that it can be used to destroy missiles and aircraft through soft-kill. India has never shared any information and kept it confidential but the first experiment of this weapon was conducted in Siachen Glacier on Pakistan army. Where 125 soldiers of Pakistan army died in an avalanche created by the Kali-50000.